This has also become a UPI article

The Tiniest Show in Town!

At the Flea Circus, There's More Than Meets the Eye

The magic of the flea circus climaxed during the chariot race. That's when ringmaster Adam Gertsacov persuaded the audience to fall in love with Midge and Madge, the tiny stars of his Acme Miniature Circus.
Yesterday about 40 people -- a mix of families and hipsters -- at the Palace of Wonders on H Street NE rose to their feet, craning their necks to get a better look at the action. Gertsacov, wearing a purple top hat, shot a toy gun and the fleas were off. 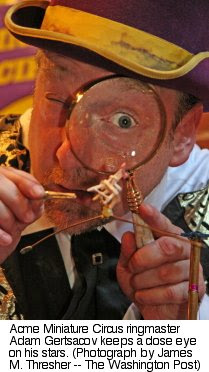 "We've approached the straightaway," he said, talking double-time, like a sports announcer. "It's going to be a very close race. Midge is making her move. Let's hear it!"
The audience screamed and one man broke into a chant: "Let's go, Midge! Let's go, Midge!"
Who won? Maybe the more pressing question is whether there was a race at all. "Professor" A.G. Gertsacov has worked to revive a tradition that's been mostly dead since the 1950s. He's also revived the question that has always accompanied the spectacle: Are there actually any fleas?
Tough to tell. There were two small chariots moving across the stage (about as big as a school desk) but any fleas pulling them were impossible to see -- even from the front row, even with Gertsacov's magnifying glass hovering above them.
Gertsacov, however, insists that his stars exist. "It wouldn't be much of a flea circus," he said, "without the fleas."
The 42-year-old resident of Yonkers, N.Y., started his flea circus in 1994 and has presented it more than 1,000 times. The clown college graduate first got the idea after watching Charlie Chaplin host one in the film "Limelight." Gertsacov initially pantomimed the act. Then a fellow performer gave him some advice.
"He said, 'Get rid of all the clown stuff,' " Gertsacov recalled. " 'You're so big, they're so little. You love the fleas. That's your show.' "
The Acme company is one of only a handful of flea circuses left in the world, he said. They were popular in Victorian days, but existed in New York's Times Square until 1957. Gertsacov revived the Times Square show in 2002, performing in the now-defunct Palace of Variety on West 42nd Street, about two blocks from the original location.
Gertsacov wouldn't reveal his secret for training fleas, but he did assure the audience that he uses only positive reinforcement.
"I treat them as if they are my own flesh and blood."

And, in some ways, he said, they are. Gertsacov said he uses the Pulex irritans flea, or the human flea, for his show. They like human and pig hosts best, so he feeds them by pricking his finger and bleeding into a petri dish every 10 to 12 days. Uh-huh.
Gertsacov uses only female fleas because they're bigger and easier to train. But not every flea is cut out for being a circus flea, mind you. He gets his performers from an entomologist and then puts them through rigorous exercises to see if they've got what it takes. Pulex irritans lives for about a year, so there have been quite a few Midges and Madges. 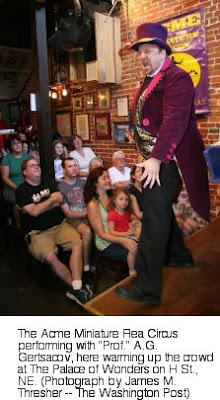 Gertsacov initially thought that his circus would attract families, but it turned out that "the punk-rock-tattooed guys loved my show." At the Palace of Wonders, a sideshow-themed bar, he attracted plenty of both families and tattooed folk. (He sold flea-themed temporary tattoos at the beginning of the show, so the two demographics started to blend together.)
"I feel a little guilty coming to a flea circus," said Kathy Hutchins, who brought her 12-year-old daughter. "I have dogs and cats, so I've spent a lot of time trying to eradicate fleas. I hope they're not relatives of Midge."
Gertsacov lamented the flea eradication industry during the flea history segment at the beginning of the performance. He also started off with a "flea" market, selling plastic magnifying glasses, "Save the Fleas" bumper stickers and 2-by-3-inch programs.
As for the race: Despite the zeal of Midge's fans, Madge pulled ahead at the finish and won. Gertsacov said it was time for Midge to rest, so, using tweezers, he placed her in a miniature Airstream trailer adorned with a sparkly green "M" on top.
For a solo stunt during the show, Madge walked a tightrope while balancing a chair and a pole. Gertsacov watched the death-defying act through a magnifying glass and put her in a spotlight by shining a flashlight on her.
The show's grand finale was supposed to have Midge and Madge shot out of a cannon, sailing through a fiery ring and landing safely in their cushy trailer.
"And now, ladies and gentlemen, a moment of silence for their brother Leopold, who died while attempting this trick."
The sister fleas stayed safe because Gertsacov was cursed with two malfunctions. The ring of fire wouldn't light, and then the cannon wouldn't shoot. The ringmaster improvised his way out of it, urging the audience to visualize the stunt.
By the later show, he said, he hoped to have worked the bugs (ha ha) out of the system. That 8 p.m. show admitted patrons 21 and over only because the fleas performed "completely nude," Gertsacov said.
Amy Pollok, whose husband co-owns the bar, brought her two daughters to the show. The girls, ages 3 and 6, enjoyed the flea circus but Pollok suspected that "it might have been the popcorn." Pollok, for her part, tried to buy into Gertsacov's magic.
"I would like to believe there is a flea out there named Madge," she said.
at 10:05 AM