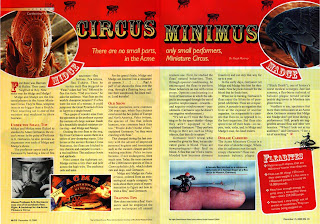 CIRCUS MINIMUS
There are no small parts, only small performers, in the Acme Miniature Circus.
by Hugh Westrop

First there was Barnum & Bailey. Then came Siegfried & Roy. Now make way for Midge and Madge!
Midge and Madge are the featured players in the Acme Miniature Circus. They're fleas, wingless insects no bigger than a freckle. Their traveling act is one of the weirdest and wackiest in show business.
UNDER THE SMALL TOP
Midge and Madge were flicked to stardom by Adam Gertsacov, the circus's owner. In the guise of Professor A.G. Gertsacov, he also presides as ringmaster over each of Midge and Madge's shows.
The professor opens each performance by hawking a line of flea souvenirs- flea buttons, flea tattoos, flea T-shirts. Then he recites such flea doggerel as "Fleas? Adam had 'em," followed by flea fun facts. "Did you know," he asks the audience, "that fleas are the world's champion jumpers? If a flea were the size of a woman, it could jump over the Great Pyramid of Giza in Egypt in a single bound."
Then gasps of wonder arise from the spectators as the professor exposes the contents of a large suitcase. Inside lies a beautifully detailed miniature circus ring-- and Midge and Madge.
Guiding the two fleas to the ring, the Great Gertsacov assists them in a series of jaw-dropping stunts. Like horses at the ancient Roman Circus Maximus, the fleas are hitched to tiny chariots and compete in a race-- a real nailbiter. The audience hoots and applauds.
Next comes the tightrope act. Madge carries a tiny chair and pole across the high wire. The audience oohs and aahs. For the grand finale, Midge and Madge are lowered into a miniature air cannon. 3....2....1.... Pop! A puff of air shoots the fleas over the ring, through a flaming hoop, and into their sumptuous, fur-lined trailer. Loud hurrahs!
OLD SHOW
Similar spectacles were common 200 years ago, when flea circuses entertained the hoi polloi of Europe and North America. Pulex Irritans, the species of flea that infests humans, was common back then too. "People didn't bathe often," explained Gertsacov, "so they were crawling with fleas."
That changed during the last century with the advent of improved personal hygiene and inventions such as the vacuum cleaner and the washing machine. Pulex irritans became, if not endangered, then much rarer. Today, the most common of the 2000 known species of fleas is Ctenocephalides felis, which infests cats and dogs, said Gertsacov.
Midge and Madge are Pulex irritans, ordered from an entomological supply company. "It took about three years of experimentation to figure out how to train a flea," said Gertsacov
TRAINING TIPS
How does one train a flea? Gertsacov said he employed the same techniques all animal trainers use. First, he studied the flea's natural behaviors. Then, through operant conditioning, he encouraged the fleas to perform those behaviors on cue with circus props. Operant conditioning is a form of instruction in which the subject is encouraged through the use of positive reinforcement-- rewards-- and negative reinforcement--punishments. (Gertsacov says he doesn't use negative reinforcement.)
"It's not as if I train the fleas to sing or fly the space shuttle-- things they aren't equipped to do," explained Gertsacov. "They perform things in their act, such as lifting objects, that they do in nature."
Gertsacov won't reveal what reward he gives his fleas, but an educated guess is blood. Fleas are hematophagous -- they feed on blood. A flea that can't find a warm-blooded host becomes dormant (inactive and can stay that way for up to a year.
In the early days, Gertsacov let Midge and Madge bite him for their meals. Now he pricks himself for the blood that he feeds them.
When not in training, Gertsacov's fleas enjoy the lifestyles of pampered celebrities. Fleas are ectoparasites. A parasite is an organism that lives at the expense of another organism. An ectoparasite is a parasite that lives on, as opposed to in, the host organism. But fleas also spend time off their hosts-- in carpets, beds, sofas, and in Midge and Madge's case, fur-lined trailers.
DISEASE CARRIERS
The Acme Miniature Circus is a true slice of showbiz magic. Where else do audiences root for such creepy characters? Fleas can transmit bubonic plague ("Black Death"), one of history's worst medical scourges. Just last summer, a flea-borne outbreak of bubonic plague turned several prairie dog towns in Montana into ghost towns.
Needless to say, spectators feel more than enthusiasm at an Acme show. Gertsacov ensures that Midge and Madge don't get loose during a performance. Still, people are suggestible around fleas and other wee beasties. "When I look out at my audience," said Gertsacov," I see a lot of scratching."