http://newyorkdailyphoto.com/nydppress/?p=13633
I performed two shows a day at Maker Faire for two days in an outdoor setting, which is not ideal for the show, but worked out okay. 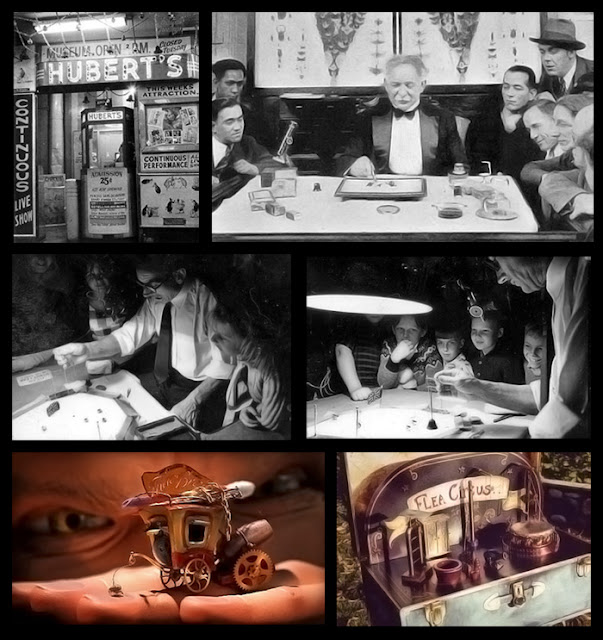 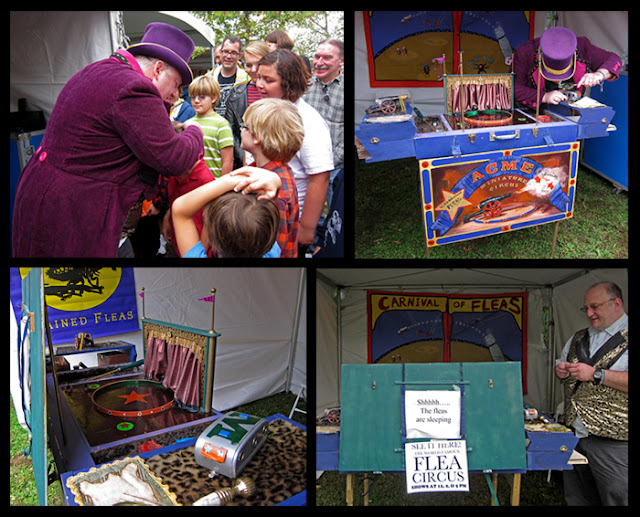 New York City was home to one of the most astonishing things to those unfamiliar – the real flea circus. Most are familiar with the phrase, however, there are only a handful of flea circuses at the time and fewer yet that employ actual fleas, so it is very unlikely that any given individual has seen one of these performances first hand.
Yes, real human fleas, pulex irritans, were trained to pull miniature chariots and perform circus acts, rotate ferris wheels, and kick balls. Minuscule harnesses made from thin gold wire were wrapped around the neck of the flea. The harnesses were then attached to a variety of objects. Fleas are renowned for their incredible strength and are able to pull up to 160,000 times their own weight and jump 150 times their own size. Their lifespan, however is typically only months, and so new recruits must be found and trained. And, they must be provided a diet of human blood. Typically, owners of flea circuses just let fleas feed from their arms.
The flea circus flourished in the Victorian age, however, the harnessing of fleas goes back much further. The first to harness fleas were watch makers who demonstrated their skills in fine metal working skills. Mark Scaliot is 1578 is credited with locking a flea to a chain with “a lock consisting of eleven different pieces of steel, iron, and brass which, together with the key belonging to it, weighed only one grain.”
One of New York City’s great institutions was Hubert’s Dime Museum, which occupied 228-232 West 42nd Street near Times Square from the mid-1920′s until 1965. The building which housed Hubert’s was a schoolhouse, designed in the 1880′s by McKim, Mead & White. Hubert’s was a phantasmagoria of some of the greatest novelty, freak, sideshow, and variety acts and the home of the last working flea circus in the United States – Heckler’s Flea Circus. Heckler’s occupied a section of the basement and required an additional admission. It was here that the Heckler family plied their trade. The circus was started by native Swiss William Hecker circa 1923 and sons William Jr and Leroy (“Roy”). Roy took over the operation in 1933 and continued to operate the flea circus until he retired in 1957.
So, when I attended the World Maker Faire on September 29, 2012 and happened upon the Acme Flea Circus very unexpectedly, you can easily understand why I was stopped in my tracks and jubilant that I would at last be able to see a real flea circus. Adding to the serendipitous encounter was that the performer, Adam Gertsacov, already knew me, having been a previous customer of my business. I stood alone at his booth and it was a good 30 minutes to showtime. However, I was very passionate about seeing a flea circus in person and close up, so I stood and chatted with Adam while he prepared for his show. He told me all the details of the flea circus. I was later to learn that Adam was one of the most educated clowns in America – not only was he an alumnus of Barnum and Bailey’s Clown College, but he was also a graduate from the University of Pennsylvania and held a master’s in theater and communications from Rhode Island College.
Adam assured me that I need not be concerned about having a “front row seat” since his show was designed to insure that all audience members were guaranteed to see all the details of his performers. This perplexed me, since I had learned that flea circuses like Heckler’s typically provided audience members with magnifying glasses. Historical photos showed him surrounded closely by a small number of viewers. How would Adam accomplish this at a distance? Theater.
Adam’s show involves a lot of theater, history, and clever quips and bits, including a “flea market” where small items are sold to the audience, whom he then proclaims has been adequately fleeced. The act consists of his two fleas, Midge and Madge, who engage in a chariot race and a tight-wire act. Children laughed and squealed, however, credulity was strained when the fleas were shot from a cannon through a hoop of fire to land inside a miniature Airstream trailer.
I became intrigued and through a little research learned that a number of flea circuses currently working do not use fleas. At least one, Hans Mathes’s flea circus at Oktoberfest (you can see an actual video below), has real fleas. As to Adam Gerstacov and his Acme Flea Circus, in the end, I just decided to suspend and see it as an enjoyable piece of theater, not worry whether I had seen trained Fleas or had just been Teased