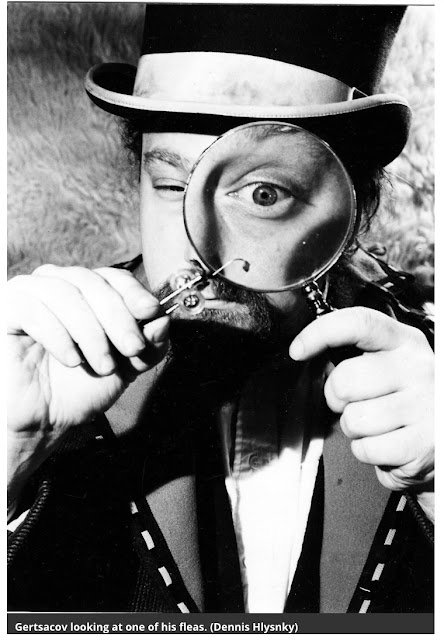 Take a trip to the (very small) Big Top

Come one, come all, to the show of the century! See jugglers, tightrope walkers, chariot races, and more. Admission is just the cost of the magnifying glass you’ll need to see the teeny performers! That’s right, a magnifying glass—because this is no ordinary circus. This is the time-honored tradition of the delightfully buggy and hopefully not itchy flea circus.  But please, as Chicago-based Acme Miniature Flea Circus ringmaster Adam Gertsacov says...leave the dogs at home.

Gertsacov started his flea circus (“with a lot of flea bites,” he told Smithsonian.com) in the early 90s, but the origins of the show itself reach back much further than that, all the way to watchmakers in the 1500s who were said to have wanted to impress crowds with their ability to make tiny working mechanisms. The first was London watchmaker Mark Scaliot who, in 1578, is credited with having made “a lock consisting of eleven pieces of iron, steel and brass, all [of] which, together with a key to it, weighed but one grain of gold,” Barkham Burroughs wrote in his 1889 book, Encyclopaedia of Astounding Facts and Useful Information. “He also made a chain of gold, consisting of forty-three links, and, having fastened this to the before-mentioned lock and key, he put the chain about the neck of a flea, which drew them all with ease. All these together, lock and key, chain and flea, weighed only one grain and a half,” Burroughs continued. Watchmakers continued the practice through the 1700s, harnessing fleas to tiny handmade chariots or other items the insects could pull across a small stage.

Then in the 1830s, performing fleas hit the big time. Italian-born Louis Bertolotto opened a new circus show in London, called Signor Bertolotto’s Industrious Fleas. The insects were the perfect stars for the miniature circus, mainly because they were so ever-present in society that in order to find your own troupe of artists, all you really needed to do was look under the bedcovers. Bertolotto’s performances reflected political events of the time; he even recreated Napoleon’s defeat at Waterloo with 435 fleas, all wearing outfits for battle, riding in golden saddles and carrying tiny swords. With that mock battle, flea circuses were cemented as one of the leading attractions of this era.

According to Gertsacov, the most famous flea show in history was arguably Professor Heckler’s. He performed it first at the 1893 World’s Columbian Exposition in Chicago, then he and his son (who continued his father’s work) took the act to Times Square, where the fleas performed until 1957 in Hubert’s Dime Museum. Gertsacov paid homage to the Hecklers with his own Times Square flea circus in 2001, only two blocks from where the Heckler show was once held, before taking his circus worldwide.


Alas, the world has become evermore technologically advanced, and around the 1940s and 50s, the demand for true flea circuses began to decline. “As television became popular and as human fleas became rarer, primarily through the use of modern appliances such as the vacuum cleaner and the washing machine, the flea circus has become harder and harder to find,” Gertsacov said.

Luckily, we can still get in on the fun today in a veritable revival of the Victorian-era flea circus. Gertsacov takes his show all over the world based on booking requests, but lately has been hosting circuses at the Garfield Park Conservatory in Chicago. His fleas do three main tricks: “They pull chariots in a chariot race, a flea walks on the tightwire while balancing a miniature chair and pole, and there’s a death-defying finale, where the fleas get shot out of a cannon through the flaming hoop of death and into their lavishly decorated trailer,” he said. Gertsacov’s show lasts about 45 minutes and also includes an illustrated lesson on fleas, “flea verse” poetry, and a flea market beforehand selling what he says is the world’s smallest show program.

“The program is a guaranteed collectible item, guaranteed to go up in value at least 10 percent over the next 10 years,” he said. “If you don’t believe me, come back in 10 years and I’ll purchase it back from you for 11 cents. On some level, if you haven’t been bamboozled by the flea circus guy for a dime, have you really seen the show?”
On the east coast, flea fanatics can catch Maine’s Dr. Wilson’s Flea Circus—An Extraordinary Entomological Exhibition Featuring Trained Fleas Executing Acts of Skill and Daring,” where the fleas push heavy objects (“the equivalent of a grown man pushing a weight of twenty-three tons,” the website says), tackle the flying trapeze, and rear up on their hind legs like miniature angry bears.

Heading somewhere else in the world? The international flea circus directory lists more than 30 shows in the United States alone, and even more abroad in the UK, Ireland, Australasia, Europe, Israel, Mexico and South Africa.

“The flea circus, like other sideshow and circus skills, is a direct connection to a simpler time unmediated by electronics and filled with the simple ability to wonder at the marvelous world around us,” Gertsacov said. “I would argue that the ability to wonder is one of the things that separate humans from beasts.”

Read the original article
at 11:00 AM